It’s of no surprise that Drake’s Scorpion is being streamed at an incredible rate, but Spotify’s latest report is impressive even by Drake’s very high standards.

According to a tweet from the streaming service, the rapper’s new project is bringing in 10 million streams per hour on release day. Surely, that has something to do with the fact that the double LP is 25 tracks in length, but either way, it’s an impressive feat, and should result in big numbers on next week’s Billboard charts. According to a report from Hits Daily Double, the album also managed to score 30,000 units sold traditionally on iTunes overnight. 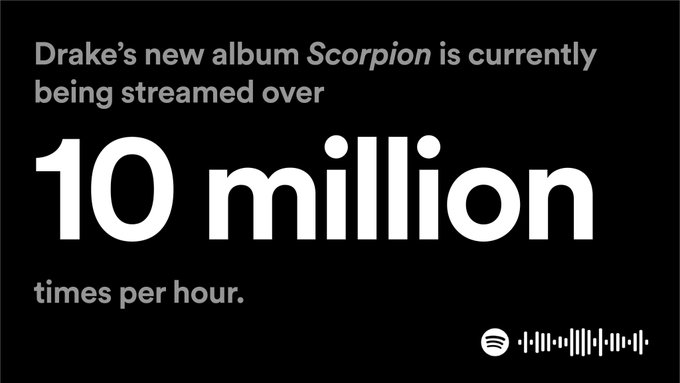 Drake’s 2017 project, More Life, billed as a playlist rather than an album, brought in 505,000 equivalent album units in its first week. Views, Drake’s last proper studio album, at least by his definition, broke 1 million in its first week.

Though the sales will not count towards the album charts, Scorpion is already eligible for platinum certification thanks to the massive slaes of its pre-release single “God’s Plan,” “Nice For What,” which each debuted at No. 1 on the Hot 100, with “Nice For What” unseating “God’s Plan” at the top of the charts.

Will Scorpion be Drake’s second project to break the million mark in its first week? It’s possible but not promised. Billboard will publish the official sales numbers in just over a week’s time.