A hat-trick from Lionel Messi sealed the La Liga title for Barcelona as they beat Deportivo La Coruna 4-2 on Sunday evening. This is manager Ernesto Valverde’s first season in charge of the Spanish team.

It is the 25th time Barcelona have won La Liga .

🏆🔵🔴 CHAMPIOOONS!!!
It's not just this season's title.
It's not just our 25th @LaLiga.
It's a historic decade.
7 championships out of 10!#7heChamp10ns pic.twitter.com/5cy1GNLVib

Argentina international Messi ensured the title was won with a flourish as he notched his 46th hat-trick for club and country. 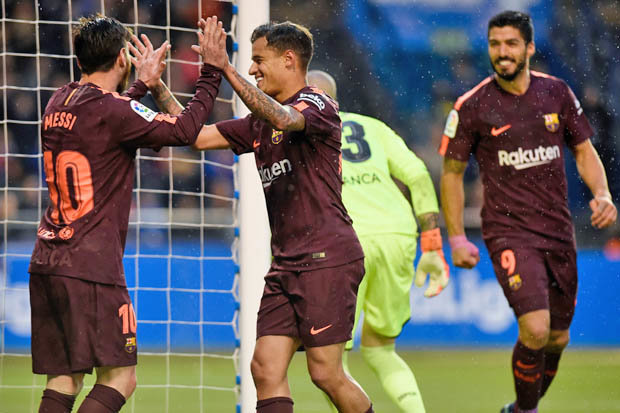 Man of the match: Lionel Messi.

While it was joy for Barca, the defeat means that Clarence Seedorf’s Deportivo side are now relegated from the division.

It took seven minutes for the visitors to take the lead. Ousmane Dembele’s initial cross was well blocked by Luisinho, but he pulled the rebounded ball back to the top of the area for Coutinho to curl a beautiful strike into the back of the net.

Depor had a goal ruled out for offside 10 minutes later. A corner was headed down by Raul Albentosa into the path of Fabian Schar, who forced a fine, fingertip save from Marc-Andre ter Stegen. Perez poked home the rebound at the near post and wheeled away to celebrate, but the referee ruled the goal out for offside against Schar, much to the dismay of the home contingent.

Man of the match – Lionel Messi

Messi continues to break records, and was vital to Barcelona’s victory here as Deportivo pushed their opponents right until the end with their own survival on the line.

He has now reached 550 goals for Barcelona in 634 appearances, scoring his 41st hat-trick for the club, and has won his ninth La Liga title with the Catalan side along with Andres Iniesta, which is a new club record.