Manchester City retained their Premier League title and finally ended Liverpool’s magnificent challenge after surviving a scare to come from behind and outclass Brighton at the Amex.

Pep Guardiola’s side started the day knowing victory would ensure they would be the first team to retain the crown since Manchester United 10 years ago – but any slip-up could let in their relentless pursuers Liverpool, who were hosting Wolves at Anfield. 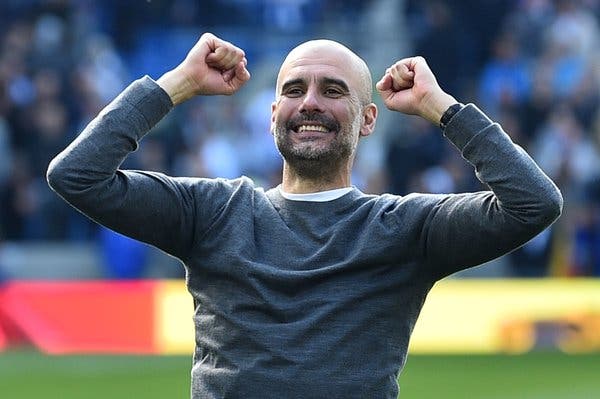 And when Glenn Murray gave the Seagulls the lead with a glancing header from a corner after 27 minutes, anxiety rose in Sussex and hopes rose at Anfield that Liverpool might win their first title in 29 years.

Manchester City’s response was instant, emphatic and ruthless as they swept Brighton aside to end the campaign with a record 14 successive league victories, making it 32 in all, which equals the record they set last season.

Sergio Aguero pounced in the area to equalise inside 83 seconds and Aymeric Laporte arrived unmarked on the end of a corner to put City ahead before half-time.

Brighton had no way back and City completed the formalities in spectacular style as Riyad Mahrez fired high past Mat Ryan just after the hour and Ilkay Gundogan’s spectacular 72nd minute free-kick sparked wild celebrations.

City may not have repeated the 100 points that won the title last season but this was arguably an even sweeter success given the season-long battle with Liverpool. 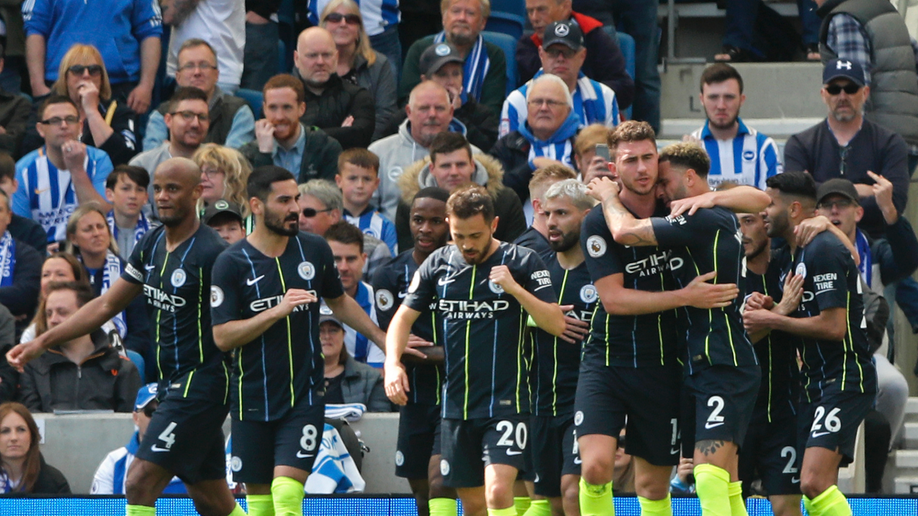 City knew their task at kick-off here in Sussex – but whether it was a combination of nerves or unwitting complacency, it took the fright of going behind to kick them into action.

City were careless and lacking in urgency until Murray bundled in a near-post header.

It was the signal for the last assault on the title.

Aguero swiftly put the show back on the road and once Laporte escape the attentions of Murray to head home, this was job done.

It was a fitting decoration that the final two goals of City’s season were thunderous efforts from Mahrez and Gundogan, demonstrating the quality that is spread so liberally through this squad. Brighton, to their credit, did not simply stand aside and allow the party to take place: Chris Hughton’s side were organised and resilient but once they levelled matters up, City were irresistible.

And even the home fans accepted the inevitable by the final whistle, rising to first give a standing ovation to City captain Vincent Kompany when he was substituted and then to Guardiola and his team once referee Michael Oliver had sounded the final whistle that confirmed they were were Premier League champions for the fourth time and for the sixth time in total.

City’s achievement, completed with that astonishing 14-game win towards the winning post, is underscored by the fact they saw saw off a Liverpool side that lost just once this season – to City – and amassed 97 points.

This is a magnificent feat by Guardiola and Manchester City.

The best team always ends as Premier League champions – and no matter how superbly Liverpool have performed, they came up against a truly outstanding team that was just one point better.

This was a day of celebration for Manchester City – and also one of satisfaction for Brighton as they look forward to another season in the Premier League.

It was a particularly special day for their iconic 38-year-old Spanish defender Bruno, who was making his final appearance. He was cheered throughout and made an emotional farewell when he was taken off.

Bruno, clearly loved down here, was also acclaimed during a post-match speech.

The Brighton fans left for summer in good heart after surviving late worries that they may be hauled into the relegation fight and now shrewd manager Hughton will start plotting again to ensure they are in position for another season of consolidation when it all starts again in August.